Jennifer Wharton is a low brass specialist based in New York City. Though getting her start classically, Jen has deep roots in jazz, commercial, chamber and Broadway music. Like a virus, she won’t stop until she has conquered the world!

These days, Jennifer can be found leading her trombone-forward ensemble, Bonegasm, and performing in West Side Story but has also held positions at King Kong, Beautiful, The Gershwin’s Porgy and Bess, Jekyll and Hyde, Scandalous, Wonderland, 9 to 5 and Curtains, as well as performing as a substitute in over a dozen other Broadway productions. 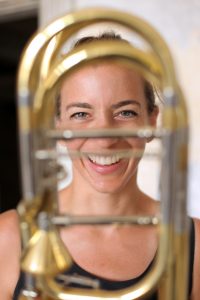 Online Trombone Journal 2000 – “My Summer With The Mouse”